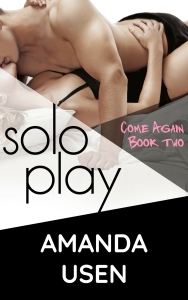 It takes two to toy with love.

When librarian Alisa Mane’s boyfriend accuses her of being frigid, she sets out to prove him wrong the only way she knows how—with research. A visit to the local sex shop uncovers the sizzling sensuality locked beneath her cool reserve, and she eagerly accepts a job testing sex toys for SoloPlay Enterprises. Under the code name “Sologirl”, she begins exploring her body on her own terms.

When Mark makes his offer again, up close and in person, Alisa realizes he’s her best chance to discover if any man can satisfy her. A red-hot month of experimentation more than answers that question, but now Alisa has another problem—DoublePlay is ready for production, and her feelings for Mark have nothing to do with business. Is she brave enough to continue playing…with her heart?

Alisa toyed with her mouse, watching the cursor dart across her screen, unable to concentrate on the actual data. Ever since Mark Winters’ DoublePlay e-mail had arrived, she couldn’t stop thinking about sex with a partner. But which kind? On the one hand, her fantasies were always about men. On the other hand, no man had ever managed to give her an orgasm, so maybe she should stick with women.

Crystal had been able to make her come. Of course, she was also psychic, totally tuned in to what Alisa was feeling at every moment. With her, she had never had to say a word. Crystal had insisted on drawing the words out of her, but there had been no real risk. That was really the crux of the problem, wasn’t it? Sex with a partner required communication, and Alisa didn’t like to volunteer information. Still, unless she wanted to spend the rest of her life communing with silicone, plastic, metal and rubber, she should probably try dating again. She giggled as the image of entertaining her visiting parents at a fancy restaurant while she held hands with a vibrating dildo popped into her head. She had been dodging her mother’s calls, but inevitably, they would have to set a date.

“Hey, Beth?” Alisa swiveled to face her desk mate’s chair. “Do you know any nice guys?”

Beth muttered something incomprehensible. She appeared to be on the search for an elusive title, and unless someone dropped a bomb on her keyboard, she wouldn’t give up the hunt any time soon.

Alisa kicked her chair. “I need a date.”

The first set of automatic doors swung open in the foyer and Alisa glanced up at the security gate to see who was coming in. Sunlight bounced off the second set of glass doors into her eyes, momentarily blinding her. When the spots cleared, she saw a man. And not one of the old guys who liked to read the free newspapers in the armchairs by the windows, either. This was a tall, blond iceberg of a man wearing a dark suit with a white shirt. His tie was pulled away from his neck, as if he had loosened the knot as soon as he’d pushed away from his desk. His hard features looked carved from cold stone. Alisa shuddered, her breath rushing out of her body.

His pale blue eyes zeroed in on the reference desk, and Beth finally glanced up from her screen. “Check him out,” she said under her breath. “Hot date, twelve o’clock.”

Alisa felt frozen to her wooden chair as the man’s eyes dropped to her nameplate. He began to walk toward them with measured strides.

“May I help you?” Beth asked, flipping her shiny red hair over her shoulders and giving him a smile that showcased every one of her perfect, white teeth.

Alisa eyed him cautiously. “How can I help you?”

“I hope you can help me find Sologirl.”

Her eyes widened, then shot over to Beth.

“I’ve never heard of Sologirl,” Beth chirped. “Is it fiction or nonfiction?”

“I’ve got this one.” Alisa jumped up from her chair and raced around the desk, ignoring Beth’s surprised look. She took the stranger’s arm and pulled him firmly toward the stacks. “I think I’ve seen it in the graphic novels.”

When they reached the cover of the tall shelves, Alisa dropped his arm. “Who are you?”

“Mark Winters,” he said, holding out his hand. “SoloPlay Enterprises.”

His laugh was loud in the quiet room, but not as loud as her thudding heart.

Alisa shushed him. “Nobody knows about SoloPlay here, and I want to keep it that way.” Her whisper was sharp. “You shouldn’t have come.”

He took her cold hand in his warm one. “You shouldn’t have said no.”