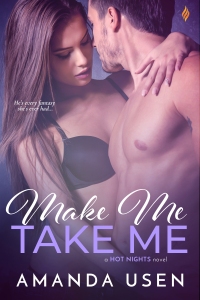 MAKE ME, TAKE ME by Amanda Usen

He’s every fantasy she’s ever had…

Betsy Mouton knows that easy doesn’t last forever. She’s working her butt off to launch the Last Call Café so her family can leave the New Orleans bar business—and its heartaches—behind forever. That is, until the hottest one-night-stand of her life shows up next door, twice as uncompromising and two million times hotter, offering to buy the bar and send the Moutons to Easy Street.

Hotelier Quinton James has never forgotten the unbelievably hot night he and Betsy shared. Never forgotten how beautifully she submitted to him, or how he found the only peace he’s ever known in her arms. Now that Betsy is the only thing standing in the way of his new hotel, she’s the one in control. But there’s more at stake than her café or laying their past to rest—Quin wants a future. With her. All he has to do is convince her…one sensual command at a time.

She wasn’t herself tonight. That was the only explanation. Betsy Mouton would never hook up with a cocky player like him. She didn’t do one-night-stands, casual sex, or irresponsibility in any way, shape, or form. But Quinton James didn’t know that. She could be whoever she wanted to be tonight, do whatever she wanted to do. She’d never see him again, and the freedom was intoxicating. Tomorrow, responsible Betsy would get on the plane to New York and set about changing her family’s destiny, but tonight she was going to embrace the spirit of New Orleans. Let the good times roll.

“Where are you staying?” she asked.

He kept kissing her, his hand cupping her ass, moving her up and down on his thigh. She dug her fingers into his shoulders, trying to brace herself against the waves of hot bliss that knocked the words from her mouth. Second thoughts crowded her brain. Just because they’d been eye-fucking each other all night and he had the patience to wait her out didn’t mean this was a good idea. “Can I assume you have condoms and no means no, just in case I change my mind?”

“I like your use of the plural as it relates to condoms, and I have plenty. But we both know no means maybe or you wouldn’t be kissing me.” When she tensed, his grip tightened. “Before you flounce off with your feminist principles in an uproar, let’s make a deal. Stop means stop, but I consider no a challenge. I’ve been sitting here all night thinking of things I’d like to do to you, and I want to make you say yes.”

“Make me?” She searched his eyes, seeing determination and so much lust she quivered. He gazed back at her with equal absorption. What did he see in her depths?

Softness to his hardness. Give to his take. Surrender. He was every fantasy she’d ever had and denied she wanted. She’d never met a man strong enough to make her do anything. She didn’t want to. She had her own plans for her future, but she was fascinated with the way he made her feel. She wasn’t going to say stop. “Just for tonight.”

“That’s all I’ve got.” That slow smile spread across his mouth. Oh dear God, that smile was lethal. Carnal. It ought to come with a warning. He trapped her against the bar and pressed his hardness into her hip. I guess the smile is the warning.

“Six hours gives a man a lot of time to think about every imaginable way to make a woman come. Let’s get out of here.”

Buy the book at AMAZON