Release day! This PLAYBOY has been a long time coming! For a limited time, SEDUCING THE PLAYBOY can be purchased for .99 at AMAZON, BARNES & NOBLE, GOOGLE, iTUNES, and more. Get your copy while it’s thrifty! 🙂

To celebrate the release of our SEDUCTIVE books, Gina Gordon and I are throwing a Facebook Party this Wednesday. Click the pic to join the party!

We hope you’ll join us and invite all your friends! We’ve got BUZZING giveaways, video excerpts, and amazing guest authors Avery Flynn, Kimberly Kincaid, Diane Alberts/Jen McLaughlin, Cari Quinn, Taryn Elliott, Jessica Topper, Jodi Linton, and Christi Barth playing “Have You Ever…” with us. It’s going to be a blast!

We’re also offering the chance to win a $50 gift card to Amazon or Barnes & Noble to those who follow our blog tour. You can find our stops right here: THE BRAZEN SEDUCTION TOUR. You have to scroll to the bottom of the page for our tour stops. 🙂 Gina and I giggled our butts off while writing our back and forth posts!

My favorite part about my new book is the slow seduction. It’s an “older brother’s best friend” story, so Jenna and Roman have some shared history. She’s got a crush on him…and she won’t take no for an answer. He doesn’t want to take advantage of her…but he doesn’t want to say no, either. Together, they are hot enough to boil a hot tub, and they nearly do…twice! Here’s an excerpt to whet your appetite:

Roman instinctively caught her. Then he forced his hands back to his sides. “There’s a perfectly good chair by the door.”

“I’m trying to make a point.” She wrapped an arm around his shoulders, and her soft breasts pressed against his chest.

He shifted, hoping she couldn’t feel the effect she had on him. The desire to grab her hips and grind against her was overwhelming. “Are you going to make me dump you off my lap?” he bluffed.

“Are you going to pretend you aren’t enjoying this?” she shot back.

The first blush of his life heated his cheeks. He spoke through gritted teeth. “Merely an involuntary reaction to a beautiful woman.”

“Careful, Roman. That sounded like a compliment.” She shifted position again, using his shoulders for balance. He flinched as the muscles spasmed, sending a bolt of pain up his neck.

“What’s wrong with you? And don’t tell me nothing this time,” she said.

“I fell asleep on the couch last night. My neck is killing me.” Maybe now she’d take pity on him and get off his lap. He repressed the flash of disappointment he felt when she slid out of his lap and stood behind his chair.

She laid her hand on the back of his neck and squeezed, making him gasp. Her grip tightened. “Which side hurts?”

“The left,” he said reluctantly.

She pressed her thumb into his left shoulder and he sagged in relief. As she dug deep into the knots that braided his muscles, the agony was exquisite. He knew he should stop her, but it felt so good, he couldn’t bring himself to do it, especially when her hands heated up, further easing his pain.

“Thanks,” he murmured, when he could take a deep breath and feel only a slight twinge of discomfort.

“You’re welcome.” She slid her hands down his chest and rested her chin lightly on his shoulder.

He inhaled, savoring her sweet scent. He knew he should say something to create distance between them, but it was such a comfortable silence he hated to break it. Her embrace made no demands on him. He was warm and content, feelings he usually didn’t associate with a woman. But Jenna had always been special—which made it even more disturbing she’d tried to play him. He tensed, remembering how tantalizing she’d looked last night. Desire surged through him again, and he leaned forward, breaking her grip. The back rub ploy was the oldest trick in the book. What was she softening him up for now?

On cue she slid back into his lap. “I have a confession to make.”

You’ll have to read SEDUCING THE PLAYBOY to find out what Jenna confesses, but you can make your own “Have you ever…” confession if you join us Wednesday, the 28th of May, 8-10 pm EST! We’d love to chat with you. 🙂 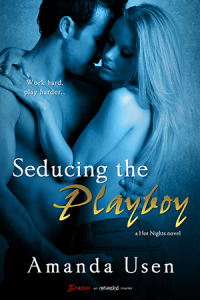 One Reply to “The Brazen Seduction Tour”