I’m so grateful to have Meg Lacey, author of SOMETHING’S COOKING, to kick off the inaugural blog of the Hungry Hearts Holiday Hop! Meg and I met at Lori Foster’s Reader & Author Get Together and hit it off like turkey and gravy! Meg also writes for the Indulgence line at Entangled Publishing, and as you’ll see from her excerpt below, she likes it as hot in the kitchen as I do! I hope you’ll enter our giveaway for a Hungry Hearts author prize pack at the end of this post. But first…check out Meg’s beautiful thoughts about THANKS-giving:

To me, there has always been something magical about Thanksgiving. I think it had to do with the song “Over the river and through the woods, to Grandfather’s house we go. The horse knows the way to carry the sleigh through white and drifted snow…”

Doesn’t that set a very specific image in your mind? It sure does to me. I’ve always wondered what it felt like to race over the snow in a sleigh knowing that at the end you’d find a large family gathering, a lot of laughter, warmth and wonderful smells, and finally delightful tastes and contentment. This sleigh image has always been so identified with Thanksgiving to me that the first Thanksgiving with the Pilgrims and Indians has always taken a backseat—except when my daughters were in Thanksgiving school plays, that is.

Now however, Thanksgiving is practically forgotten in the storm of merchandise that heralds Christmas. Our poor thankful American holiday is shunted aside as we see images of trees, santas, stockings, toys, not to mention the stress. You don’t read a lot about people getting frenzied and depressed about the Thanksgiving holiday as you do about the Christmas one. Today people are bombarded with the warm family images of a media Christmas. You know—the images that can depress the snot out of you if your family is non-traditional, practically non-existent, or just plain dysfunctional. The end result is so many people tend to kick themselves for not having the perfect holiday.

It’s time to bring Thanksgiving back. Regardless of where you are in the world, whether you celebrate this holiday or not, I hope you will all take a minute and give thanks for the good things in your life and share the hope that things can be better for those less fortunate. Let’s all hop on that sleigh to Grandma’s and revel in the feel of the wind across our faces, in the sounds of crunching snow under the runners and most of all in the joyous celebration of this season.

Here’s a little something about SOMETHING’S COOKING: 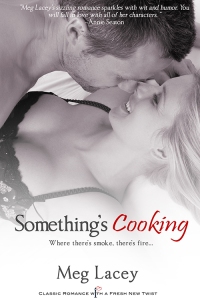 Tess Banyon and Josh Faraday in my novel, SOMETHING’S COOKING are probably enjoying their first Thanksgiving together. Tess is burning the turkey and Josh is trying to watch the game while sneaking a piece of pumpkin pie. Of course in the novel, Tess and Josh are just meeting and falling in love, after overcoming a lot of disasters and issues.

Tess Banyon has turned her brilliant recipe and crafting ideas into a multimedia empire. Landing her own TV show throws her into a panic. If she’s not careful, the public will discover she isn’t the domestic diva everyone thinks she is.

Investigative reporter Josh Faraday smells something smoking in Tess’s world. His goal to expose the real Tess goes into overdrive when she lands a television show deal. He secures an assignment to shadow her, reporting on her program, but what he’s really doing is getting dirt for his expose. Things get even stickier when Tess’s family play matchmaker. There’s no shortage of fire between them, and after an impulsive night together, Josh discovers a story he never expected–or bargained for.

Josh stood in the doorway of a kitchen that resembled an experiment gone wrong, if he had to judge by the mess on the counters. Tess Banyon was standing with her back to him, busily pressing buttons and talking to herself.

“Is it supposed to look like this? I don’t know if I’d like this on finger sandwiches. Maybe I can use it as a vegetable dip instead.” She reached for a bowl on the counter, opened the lid of the blender, and dumped something in before turning it on again.

“Excuse me,” Josh said. He took a step into the kitchen.

She hadn’t heard him, seemingly mesmerized by the green mixture lurching and burping inside the blender. Josh walked over to stand behind her as she turned the speed down, and then began to lift the container from the motor, taking off the lid with her other hand as she did so.

“I said excuse me!” he bellowed, wincing as his overloud voice echoed around the kitchen.

Startled, Tess whirled around, the contents flying through the air like a low-lying cloud of green gunk. Unerringly, it honed in on his shirt—his pale yellow shirt—where it landed smack in the center so perfectly that a bull’s eye might have been painted on his chest.

“Oh hell,” he swore, swallowing the rest of his words as the cold mass spread across his chest.

Tess dropped the container and her hands fled to her face. “My god, you scared me!”

Josh stripped off his blue blazer and plucked at his shirt, which was rapidly feeling clammy as it plastered itself to his chest. “Yes, I can see that.”

“I’m so sorry.” Tess tried to smile, giving a valiant attempt at making the situation appear normal. “But at least you…you…look good in green.”

“Thank you,” he said, giving her a wry smile as his sense of humor came to his rescue.

“You’re welcome.” Tess flushed, perhaps realizing how ridiculous that sounded. She grabbed a damp sponge and advanced on him.

He was casually dressed in jeans and a yellow shirt. At least it used to be a yellow shirt before she’d gotten to it. His hair was collar length and casually swept back from his forehead, and sharp cheekbones were balanced by a clean-cut jawline. Slashing brows set off twinkling green eyes, while firm shapely lips accentuated straight, brilliant white teeth. Sensuality mixed with effortless charm.

The man was downright luscious, even covered with gunk, which only served to force her attention to the breadth of his chest and the width of his shoulders. Once at his chest, she had to look lower at his trim hips and long legs, muscles delineated by the soft denim that molded to his form. The image burned into her brain. If she looked much longer she might have heart failure.

She jerked her gaze up to his chest again, staring at the stain on his shirt, which was resisting all her efforts to erase it. Instead, it was now twice its size. She undid a couple of the buttons, slid a hand underneath his shirt, and resumed scrubbing as if her life depended on it. The heat from his chest warmed her hand. She looked up to find him watching her. Their eyes met and as cliche as it sounded, time stood still. Those eyes, she felt as if she could lose herself in them. And his mouth was so perfect. At some point, she must have dropped the sponge—both hands now splayed across his broad, muscular chest. She tilted her chin up and parted her lips, wanting to feel the texture of his mouth on hers, the firm then tender curve of his lips, the rasp of his emerging beard as it scraped against her skin.

She wondered if his lips would singe hers. If she would sink into the heat, the feel, the hard velvety texture of them exciting her, fueling an excitement she hadn’t felt in some time. If her tongue darted forward to tangle hotly with his, giving him taste for taste, sensation for sensation, would it move her as much as she imagined, or was it just a reaction to being so close to a sexy male animal? 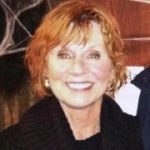 …and here’s a little something about Meg Lacey:

To learn more about Meg and her spectacular books, please visit:

The Hungry Hearts authors are giving away a prize pack! Click this link to enter a Rafflecopter giveaway!

And don’t forget to hop around the Hungry Hearts Holiday Hop to get some great Thanksgiving recipes and enter to win a Harry & David Crater Lake Gift Basket! 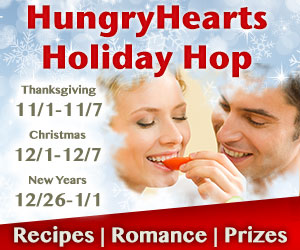 9 Replies to “Bringing Thanksgiving Back”