When I was little, my older sister used to bake a bread in the shape of a teddy bear with raisin eyes and a raisin belly button. She also used to sit on me and dangle saliva over my face in a long, thin, pendulous thread and suck it back up before it actually hit me. Most of the time, she sucked it back up. Once…it hit me, and I remember that, too. I suspect she made the teddy bear bread to make up for the horror.

In her defense, I probably deserved the torture. At least, I did if I was anything like my own children. 😉

I treasure the memory of that teddy bear bread. We would try to wait for it to cool before we ripped it apart and slathered it with butter and honey. Usually, we failed because I have no memories of cold teddy bear bread. Just warm. Rich. And cute as a raisin button! She found the recipe the other day, and promised to make me one if I came down for the holidays. For the first time in a long time (people in the food business work holidays), visiting my family for Christmas was actually possible. Game on!

We warmed up with these:

We are still disputing whose idea it was to make gingerbread houses with our kids. We have six between us, and I swear it wasn’t my idea. I claimed that I don’t do that stuff unless someone is paying me, but I’m still getting blamed. Probably because she wanted to make one big house, and I insisted each kid have their own. I’ll take the rap for that. The thought of six kids swarming over one gingerbread house had me reaching for the bourbon at noon.

On Christmas Eve, we woke up bright and early and got out the mixing bowls. We listened to our favorite childhood album – Gideon by Kenny Rogers. While I kneaded the bears, my sister shot a blackmail video of me singing every word. Our children thought we had lost our ever-lovin’ minds! (We have, and it’s all their fault.) 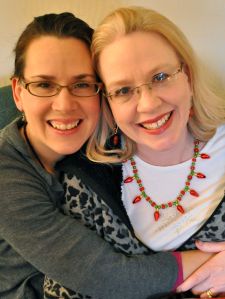