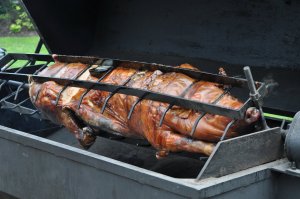 Okay, so I know it was a coincidence that I finished the second revision of Luscious the night before our neighborhood pig roast, but the timing was exquisite! The monkey on my back, the albatross around my neck, my nine-month labor was over! (Okay, writers, I know it’s not really over. I know.)

I haven’t done tooooo much public complaining on the off-chance my editor might come across my bellyaching on the internet and decide I’m not as brilliant as I have been trying to make her believe. However, I was terrified. It took me five years to write Scrumptious, partly because I stopped in the middle to have two kids and write four novellas… and Sourcebooks asked if I could write the sequel to Scrumptious in nine months.

Of course I said yes. With a two-book deal on the table, I would have said yes to anything that sounded remotely possible. Look to the right and you can read all about the sticky middle months, but now I’m done. Luscious is done! And this is what I did to celebrate:

It was another happy coincidence that the Saveur Magazine barbeque issue arrived last week. Check it out if you want the recipes for the sauces I made and many others. I’ve loved Saveur (nope, don’t work for them) for years. The photography is amazing, the recipes generally work out (there was one brown

sugar meatloaf catastrophe a few years ago, but I should have known better), and the articles make me feel like I’m in an exotic location enjoying great food with friends. My husband and I have roasted many pigs, and I think I went looking for a back issue of Saveur for the first one. Anyway, I digress.

It was the best pig yet and the sauces were a hit. I’m a mixer, so I think my favorite combination was the Eastern NC and the Memphis Wet. Piquant enough to cut the fat, with a good bit of kick on the back end. Crowd favorite was the Bourbon, which is why there is slightly less in the cup in the picture – there wasn’t much left! One neighbor almost started crying because he used to live in Eastern NC and WNY has never pretty much never heard of a BBQ sauce that is almost pure vinegar. He’ll be coming by for the recipe, for sure. Carolina Gold was good, but it made me want to go looking for a chicken finger. The KY Dip is Worcestershire-based and very spicy. I like that in a sauce, but I wish I’d made the Dr. Pepper sauce instead. I guess there’s always next year.

Holy cow, I almost forgot that there’s a pig roast in Scrumptious! Joe and Marly drive to a little town in Kentucky to roast a pig for Joe’s entire family. Marly makes blackberry cobbler, falls in love and things get hot in the hayloft… Scrumptious, coming January 2012! I know of what I write – when it comes to pigs.